It is hard to imagine a mobile app that does not involve animations. Whereas on the web, animations are typically pretty simple, if existent at all — a new page can replace the existing one; mobile applications demand a different level of attention.

CSS3 has a relatively simple API that can let you make some pretty basic animations. But you don’t have that on React Native. It probably wouldn’t be enough either way.

So, if you work with React Native, and need to implement meaningful animations, what do you need to know?

React Native has Animated, but it does look scary… at least at first.

So here are three “clusters of things” or “blocks,” if you will, that I think of when working with animations.

Animations represent a transition from one state to another:

Think what needs to be shown both before and after an animation.

Consider how the transition should go, and think of which styles need to change for that:

Logically, some component can be either shown or hidden — true or false; it can’t really be somewhere halfway. In your state, the status of whether something is shown will be either true or false.

In a good UI, things aren’t hidden right now and suddenly shown the next moment. They “appear” gradually, to help the user make sense of the interface.

So it’s clear the visual state can be somewhere between just true and false.

We can introduce another variable to represent the visual state of the slider. We want it to be a number because no matter what the logical state is, numbers allow us to represent the states in-between.

While the logical state can be binary (i.e. either true or false, 1 or 0), the visual state is floating-point.

And there is. Actually, a few.

The simplest way to do it is basically:

There are other transitions and ways to orchestrate multiple transitions, but we can keep it to Animated.timing for now.

Block 3: The Pixels aka Animated.View and interpolate

Our transitions of _shown between 0.0 and 1.0 are all for nothing is we can’t see them. So how can we see them?

We should somehow be able to use _shown to set the opacity of the child component.

Suppose we had this code before we attempting with animations:

We were setting the opacity to 0 when hidden, and 1 when shown.

Can we use this Animated.Value we have, _shown, to animate it between 0 and 1?

We can use any animated value to influence the style.

We just have to change View for Animated.View, and now we can have this:

Isn’t this a post on ANIMATIONS? How come there hasn’t been a single picture up until now?

This may sound like a scary word, but the idea is pretty simple: it allows us to keep the visual state between 0 and 1, but kind of “map” to something else, should we need to.

Say instead of just making a child component appear; we wanted also to make it “fall down” from the top a bit. And we would do that by putting the hidden component 40px higher, and animate to its normal position as we make it visible.

This will create a new animated value that will be between -40 and 0.

Dark secret: you can also output colors and degrees from interpolate.

To help, I’ve prepared a cheatsheet featuring the building blocks along with quick and to-the-point descriptions: 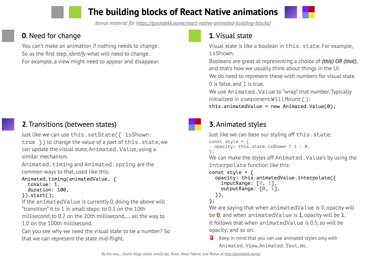 Exclusive bonus: Download the free Building blocks of React Native animations cheatsheet that you can print out or have handy on your desktop.
I'll email it to you right away so you can access it from anywhere!

No spam. I will occasionally send you my posts about JavaScript and React.

This is meant as a quick introduction to the animation primitives in React Native to give a basic idea. Here are additional useful resources that go deeper:

More about animations in React Native: